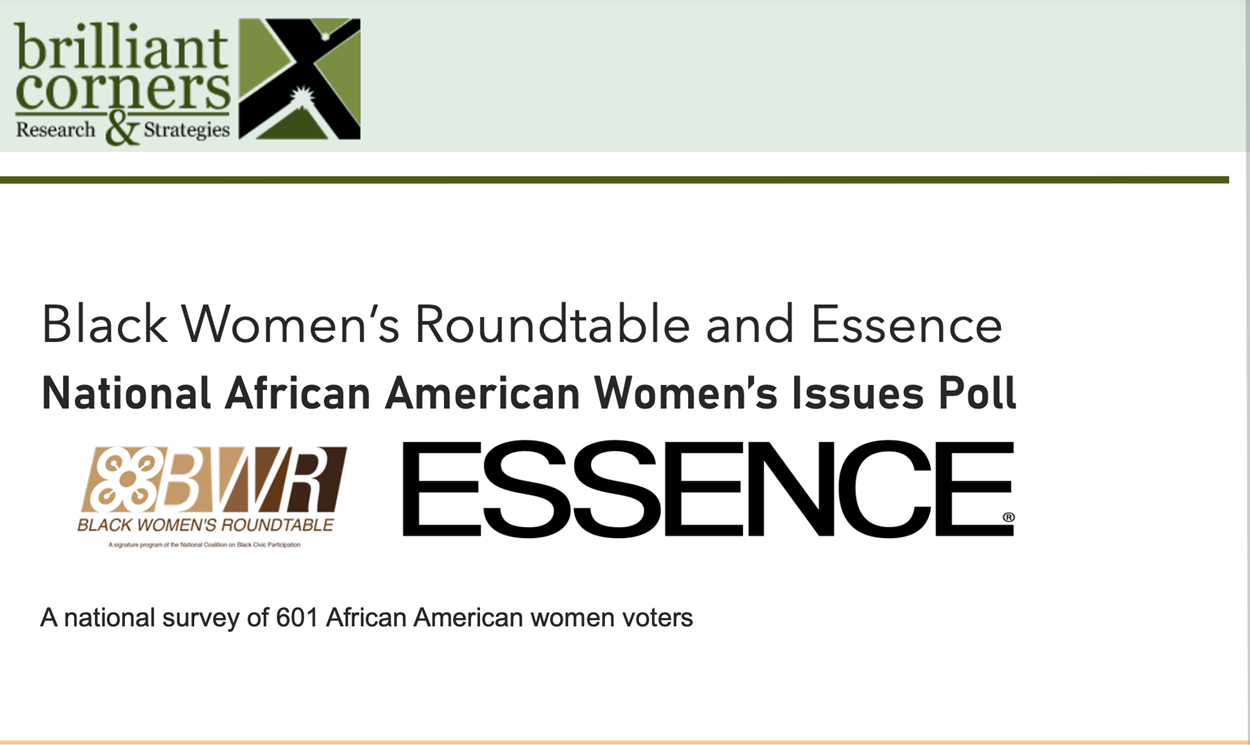 *The 2022 Power of the Sister Vote survey was conducted via an online poll by ESSENCE and BWR. Click here or a copy of the 2022 BWR/ESSENCE Poll Results, and read more about it on Essence.com.

With Congressional midterms approaching and Women’s History Month underway, Black Women’s Roundtable (BWR) and ESSENCE announce the release of the “Power of The Sister Vote” poll, a survey of Black women voters on the issues that matter most to them.

This is the seventh year BWR and ESSENCE have partnered, and this year’s survey is the first to offer findings from Brilliant Corners Research & Strategies, which polled 601 African American women voters from February 28-March 6, 2022.

A prevailing theme of this year’s survey is economic anxiety, as a plurality (49%) of respondents feel they are falling behind economically. Half of the respondents say economic conditions are worsening.

Systemic racism was also a top issue, with 33% of the women polled agreeing that the 2022 midterms should be most about “combating discrimination and systemic racism.”

According to Melanie L. Campbell, President of the National Coalition on Black Civic Participation and Convener of the Black Women’s Roundtable, “The 2022 BWR/ESSENCE Poll is a reflection of the concerns we are hearing and seeing on the ground across the country. This is the fourth year in a row that Racism…has registered as [a] top concern for Black women. We are also seeing an increasing rise in concern of economic anxiety for Black women and their families. I believe the lasting economic impact of the pandemic and the heightened partisan environment across the nation are reflected in this year’s poll.”

Karen Finney and Cornell Belcher of Brilliant Corners stated, “While Black women have always had a full plate, to manage that plate is now overflowing with an unusually high depth and breadth of issue concerns.  Economically they say they are falling farther behind personally and feel the economy is getting worse not better. Systemic racism and the need for criminal justice reform continues to be a driving concern both personally and broadly with nearly half reporting they experience racism often in their daily lives.” There are also “deep concerns about protecting reproductive freedom, voting rights and crime across Black women of all age groups.”

The Black Women’s Roundtable is an initiative of the National Coalition on Black Civic Participation, a nonprofit organization that works to engage, educate, organize and mobilize African Americans of all ages to participate in American democracy.

Thank you for signing up!

When and Where Will We Finally Enter? The Black Women’s Roundtable Releases Its 2019 Report